Sukhorukov A.N., professor at the Academy of Geopolitical Problems (AGP), academician at the Public Academy for Study of Informational and Applied Anomalies (Russia)

There are two types of biolocation: physical and mental.

Mental biolocation studies different structures and objects through the Information Field (IF) of the Earth using maps, diagrams, photos, indirect items, metaphorically interpreted phantoms etc. The mental biolocation method requires special skills and a high energy level of a biological operator (a dauzer, a radiestezist), and it depends on his or her particular state of mind and ability to connect to IFs. The method of mental biolocation requires more energy and responsibility and hardly ever provides 100% accuracy.

According to our studies carried out using the proven method of biolocation and approved instruments (IGA-1, «Vega»), the radiation from the power places of different magnitude and sizes, regardless geophysical conditions of their formation, are as follows.

The maximum energy potential is in the central area – zero point «0» of the power place. It has a small diameter compared to the total area of influence of the power place (see. the picture below). A bit further there is diametric field (a band) «1» which has increased energy intensity, but smaller than that at the zero point. This field «1» is usually considered as the central field of the power place. Subsequent diametric bands «2», «3» and «4» and further on, have successively larger width and smaller energy potential up to its complete disappearance.

The pulse mode of radiation is characterized by the fact that the polarization of bands changes from «+» to «-» periodically. Energy spreads like waves. If the time intervals of the bands in the polarized state «+» and «-» are equal, then such radiation is called symmetrical 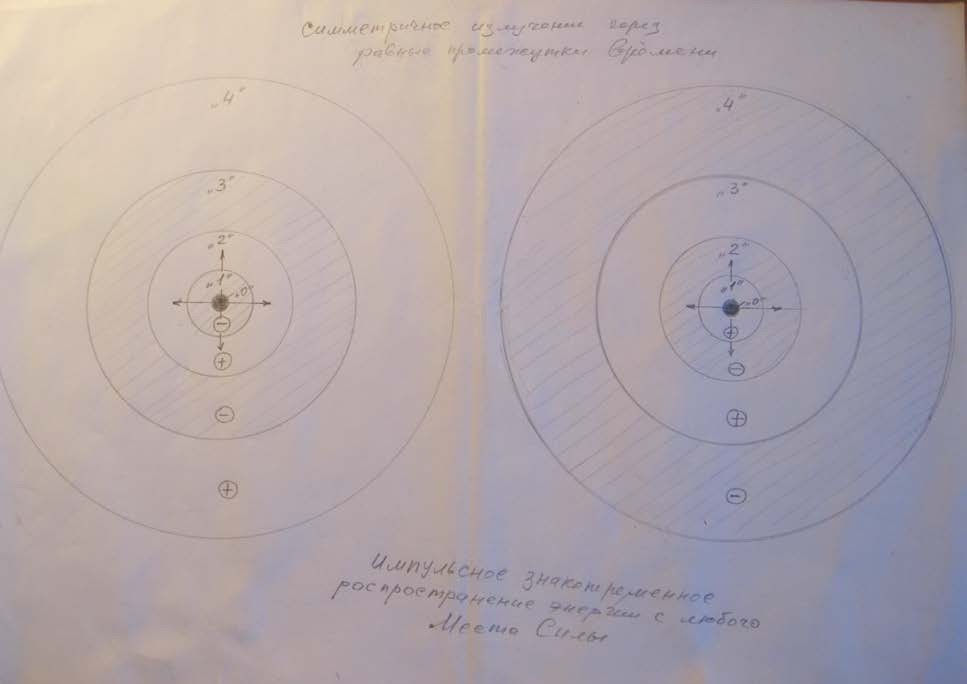 All objects in the Universe (whether they are alive or dead) exist at their individual integral frequency. The fundamental frequency has several additional component frequencies (harmonics) in different ranges.

The frequency characteristics of Mt. Kailash are as follows. According to preliminary data, the fundamental frequencies of Mt. Kailash are in the rage of 100 – 1000 GHz – 920 GHz, and in the range of 1000 – 5000 GHz — 1650 – 1700 GHz. The average individual integral frequency of human vibrations lies within the range of 600 GHz. It means that ordinary people cannot resonate with the high frequencies of Mt Kailash. Moreover, these frequencies are even dangerous for them. It also means that ordinary people cannot get into contact with energy and informational fields of Mt. Kailash, which constantly works as an active Portal. In addition, powerful pulse energy of this Portal is accompanied by different phenomena related to the changes in course of time, periodic openings of channels into other dimensions, transmutation of elements and many other still unknown phenomena.

Preliminary study of Mt. Kailash by testing power potential of rocks taken at its foot at different sides of the mountain.

Moreover, this could be possible only if this pyramidal formation was located in the great Power Place, which our studies confirmed by the method of mental biolocation (operator Sukhorukov A.N.) of the energy potential in the Kailash region. The results are represented on the map (scale М 1:50000). 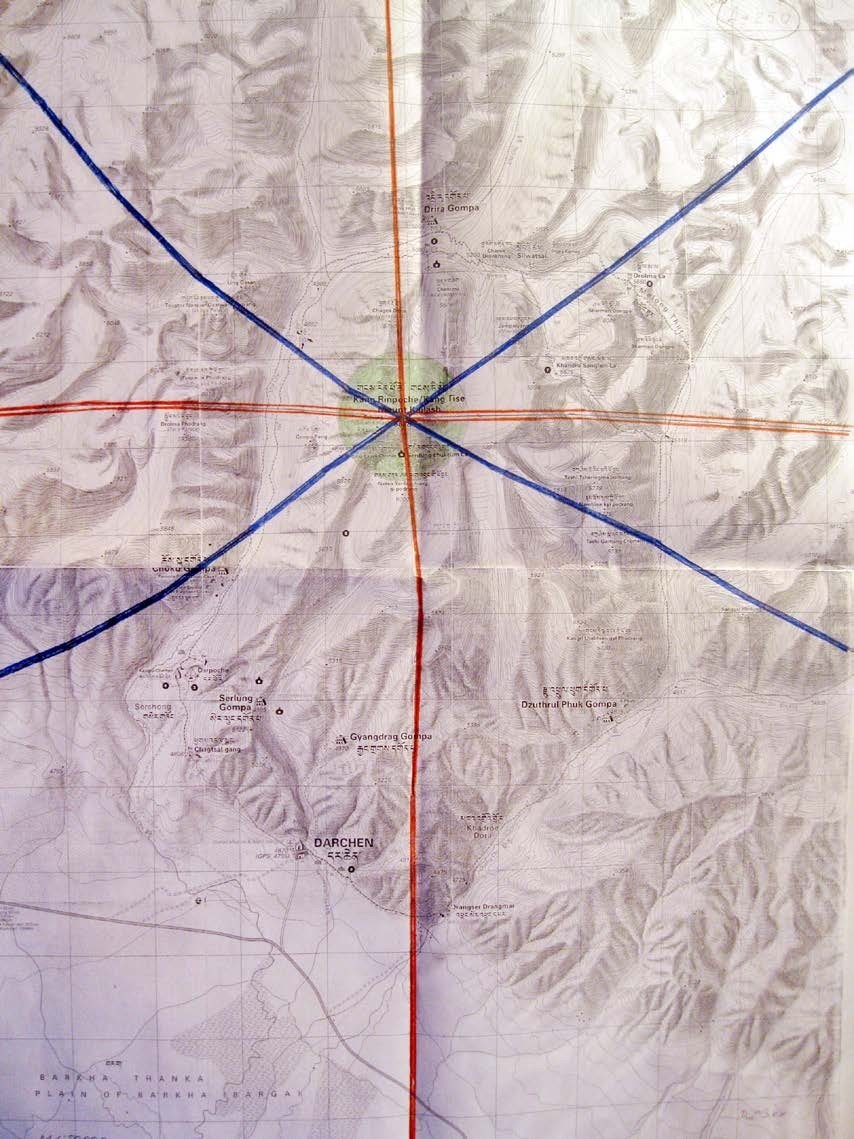 The fact that Mt. Kailash is located on the power place was also confirmed by our study carried out on a model of the Great Pyramid (Khufu). In normal condition, when it is oriented in cardinal directions, the energy radiated and absorbed by this pyramid is not symmetrical, the faces have different polarization: north and west faces have the left polarization («-«), and east and south faces have the right polarization («+»). However, once the pyramid is on the power place (for example, on the labyrinth) the pyramid receives the energy of the power place, and its emanations become harmonious and uniform along all energy axes (vectors). 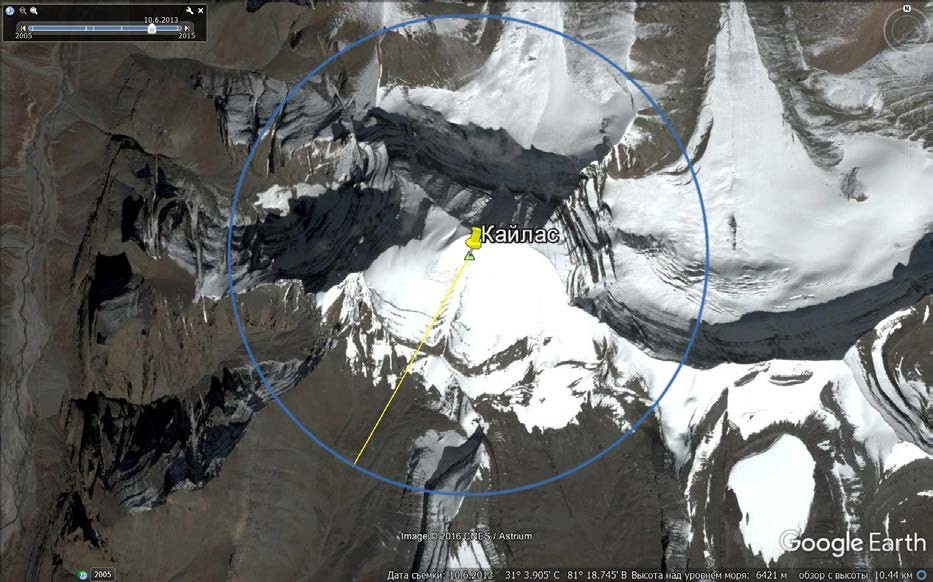 The satellite image Mt. Kailash. Within the circle with a diameter of 2.8 km, the energy level of the mountain has its maximum value

In fact, Mt. Kailash is a constantly operating Portal, an entrance to energy and informational fields of the Earth and Universe. However, the entrance to this channel is not available for ordinary people, since the energy and frequencies of this Portal are dangerous and even fatal for people. Although the people who have mastered Merkabah meditation according to Drunvalo Melchizedek (creation of a protective field Merkabah around you) are likely to safely enter and exit this Portal.     According to our preliminary studies, it is possible to connect to the energy-informational field of Mt. Kailash indirectly during meditation at a lower energy and frequency level through the energy networks of the 2nd and 3rd order. Now we are examining this subject.

Inside Mt. Kailash, we discovered huge cavities. We believe that these are not just cavities, but general boundaries of an underground city with passages, halls, niches, floors etc. 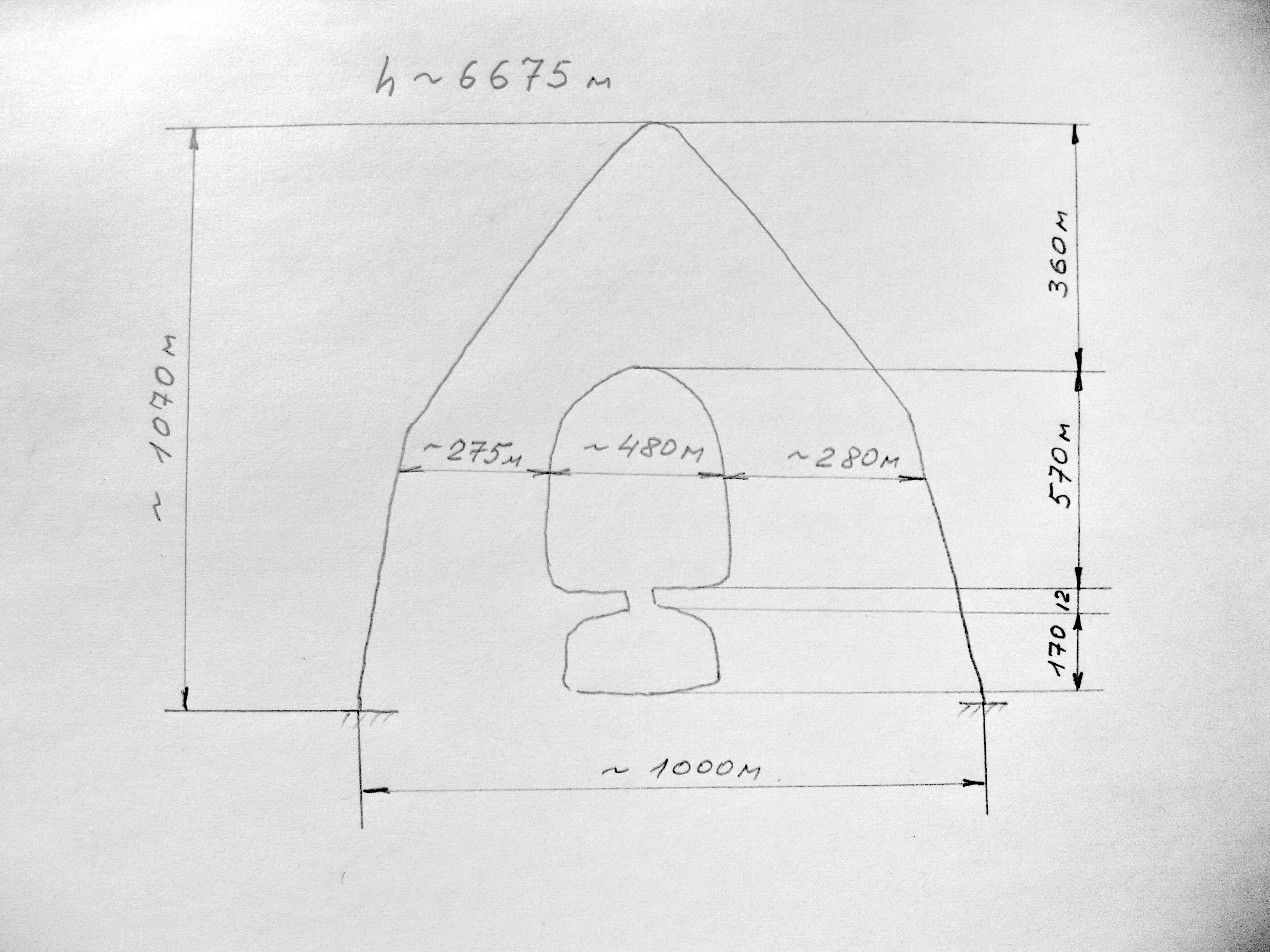 There are some answers to the questions about the phenomenon of Kailash which were obtained using the method of mental biolocation (operator A.N. Sukhorukov)

d) in the state of Samadhi – YES, about 20 creatures that, in such state they are, can influence the terrestrial events and people’s consciousness. 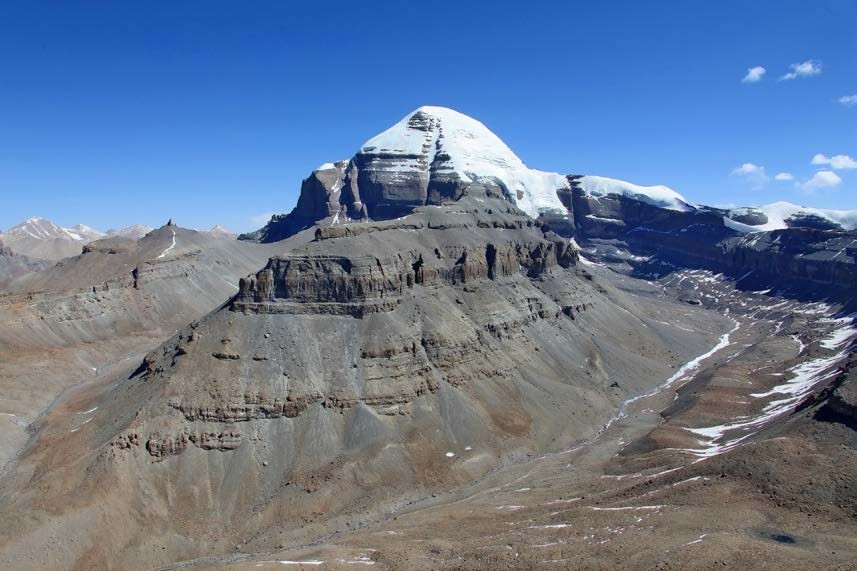 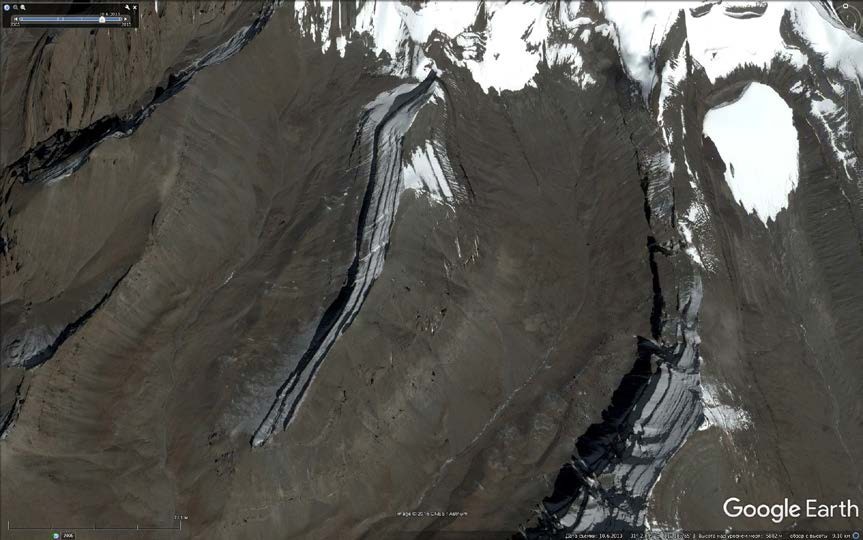 Dokhang Lungden Phuk is the highest place in the world used for permanent residence of people in ancient times. It was founded about 10 thousand years ago. 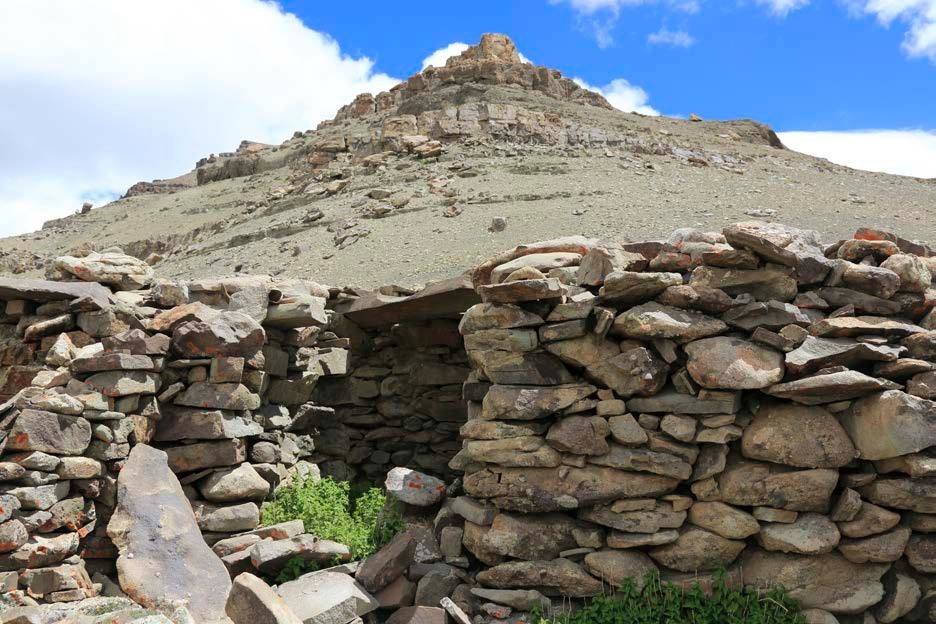 Using biolocation method a Cretan type labyrinth was determined under the base of Mt. Kailash.